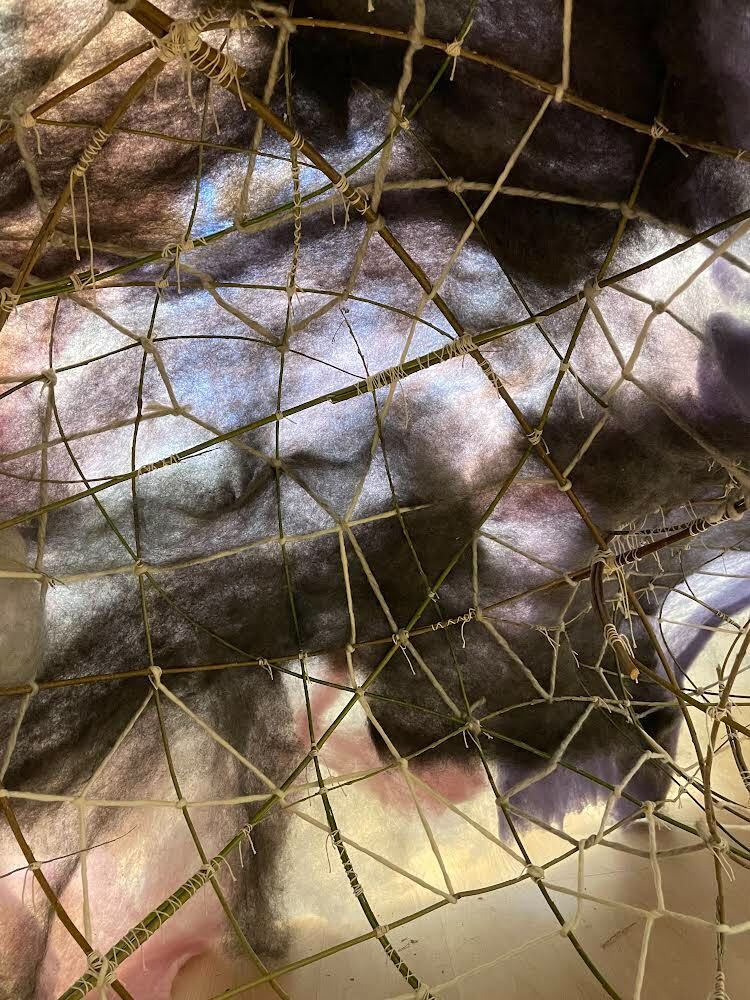 With Johanna Ulfsak we move from Merike Estna’s paintings blessed with manual talent to the crafts that have received their blessing from heritage. As in the works by Merike, here too we can witness the shifting of the format, however here this does not serve the idea of exchanging the roles of the depicted and the viewer. Making Things is in the service of a greater whole, where the heavenly and earthly objects – clouds, sieves and nets – are elevated to the dimension of world-making. Light and material create a space filled with bodies and their shadows. For this exhibition, Johanna has created a spatial experience which is exceptional in her work. We can see the childhood wonder of the performance here, the weaving and carding she has learned at school and from master crafters, braiding and also the interaction of people and things. The combined power of the space and the objects in it lies in the realised vision of a fragile young woman in the peak of her creativity, and the beauty of her role blending into the whole.

“If in ancient Greek legend Theseus followed the thread to escape an impossible maze, then the gaps between the threads painted by Johanna give us an opportunity to see the world from a different perspective. /…/ In Johanna’s works, it is important to notice and appreciate the manual work and the opportunity to reach non-verbal knowledge through physical action. A modern compulsion to constantly formulate cuts into the space surrounding manual work, and into its silence. Communicated as a text thread, Johanna’s work can easily become evasive; material-based art must be seen with the eye and experienced by the body,”1 Margit Säde writes.

The works by Johanna Ulfsak and Anna Škodenko were created specially for this exhibition. In this respect they are exceptional and bring the earlier work by other artists in contact with the presence. Anna brings the myth of Ariadne to the present day as a song that consists of images, lyrics and music, whereas Johanna creates the first act, as it were, preparing the ground for what follows, where one can stand, feed and dream. Johanna seems to tell us that before reaching the myth, we have to go through an even more ancient, pre-mythic journey – a journey that has no words, but still leaves behind the wisdom of how to make things.