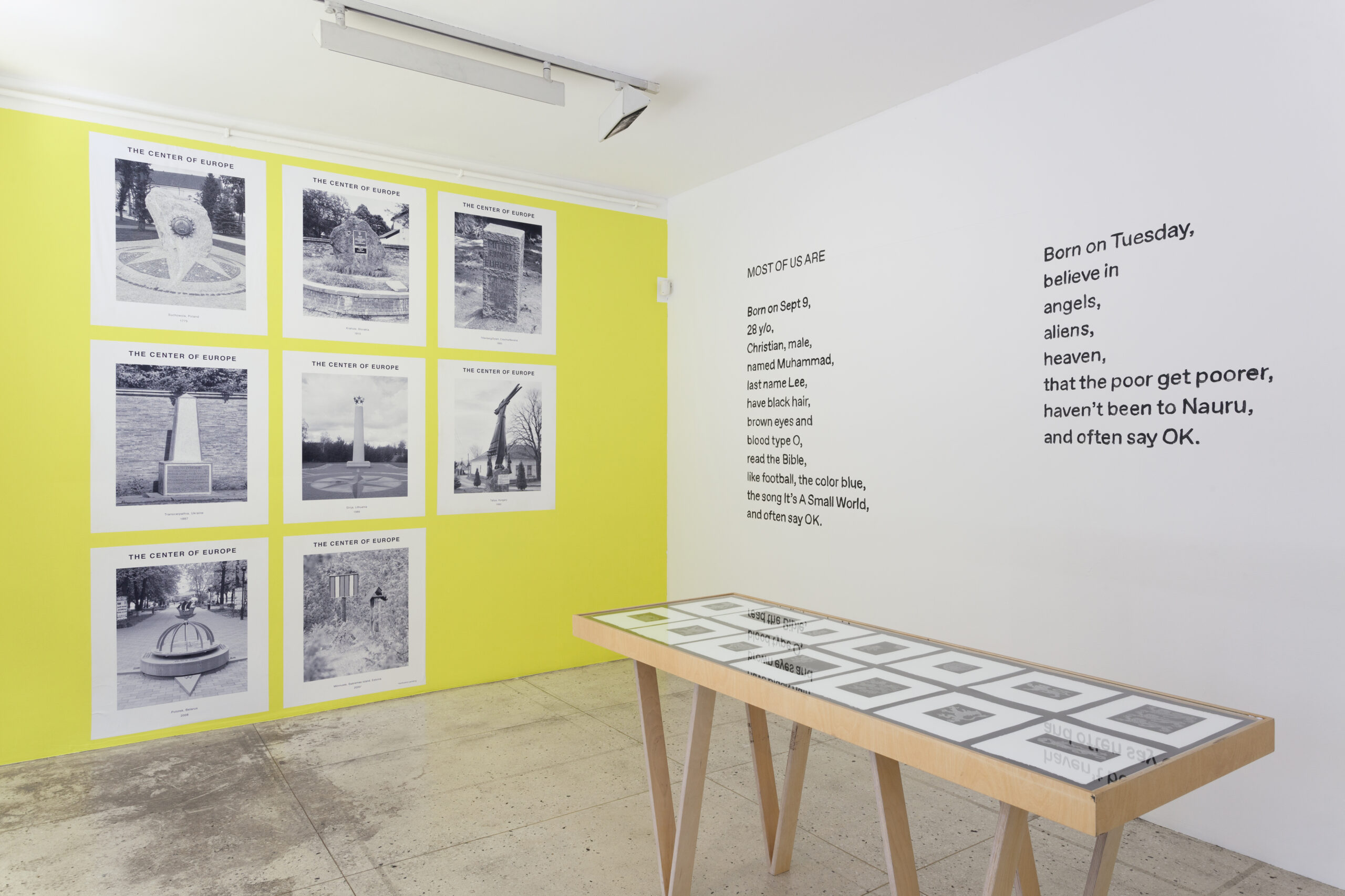 Where would you go if you wanted to experience the heart of Europe? Even by practicing a scientific approach, there are many different ways to calculate a geographic centre and the process is fraught with ambiguity. Do we count Europe’s various islands as part of the continent? If so, which ones? Is Iceland in? What about Cyprus? And where does Europe end and Asia begin? There are a lot of variables in play. “In the Centre of Europe” (2020) is a series of posters that precisely comments on the changing borders of Europe due to the redefinitions of its borders as countries and regions are added to the equation.

Cartographers have been working on the problem of locating the centre since 1775 when the Polish astronomer Szymon Sobiekrajski first deduced that it was located in the town of Suchowola in northeastern Poland, where an iron column marks the spot to this day.

In about 1815 there was a declaration that the centre of Europe was located near the mining town of Kremnica, between the basins of the Baltic Sea and the Black Sea. The method used for calculating is unknown, but it seems that it was the centre of the smallest circle circumscribed in Europe. The title of “Centre of Europe” is also claimed by the neighbouring village Krahule, now a famous centre for winter sports, with a hotel and recreation centre called “Stred Európy” (“Centre of Europe”).

In 1887, geographers from the Austro-Hungarian Empire set up a historical marker and a large stone in what is today a part of Ukraine believed to mark the geographic centre. The interpretation of the worn Latin inscription on the monument is debated, with some claiming that the marker is merely one of a number of fixed triangulation points for surveying purposes established around the territory of the former empire.

After a re-estimation of the boundaries of Europe in 1989, Jean-George Affholder, a scientist at the French National Geographic Institute determined that the geographic centre is located near the village of Purnuškės, Lithuania. The announcement led to much excitement in Lithuania, which at the time was in the process of declaring its independence from Soviet rule. A monument by the sculptor Gediminas Jokūbonis was erected at the location in 2004. The State Tourism Department at the Ministry of Economy of Lithuania has classified the Geographic Centre monument and its reserve as a tourist attraction.

Also in 2000, Belarusian scientists Alexey Solomonov and Valery Anoshko published a report that stated the geographic centre of Europe was located right by Lake Sho (near Polotsk) in Belarus. The scientists used a special computer program that counts Europe as a single entity – the White Sea and the Baltic Sea, Britain and Ireland were included in the program as continental zone objects. Scientists from the Russian Central Research Institute of Geodesy, Aerial Survey and Cartography confirmed the calculations of the Belarusian geodesists. A small monument to the Geographical Centre of Europe was set up in Polotsk in 2008.

Finally, it is claimed that if all the islands of Europe – from the Azores to Franz Joseph Land and from Crete to Iceland – are taken into consideration then the centre of Europe lies in the village of Mõnnuste, on Saaremaa island in western Estonia. No author and no method of calculation for this theory has been disclosed so far. The local Kärla Parish is seeking to verify the location and to turn it into a tourist location.

While historically the centre of Europe has been determined by scientific, topographical and seemingly objective methods, it is clear that the claims of each location are wrapped in national politics and the larger geopolitical forces shaping European history since the 18th century. Through the series, the artist reveals the story of Europe’s former borders and the new ones. At the heart of this narrative is the paradox that while its centre of power lies in the West, Europe’s geographical centre is located further East than one would expect.